I’m sure you’ve heard the stats about how back in the 70’s restaurant proportions were much smaller than they are today, as were waistlines. There’s no going back now and I shudder to think the reviews a restaurant would get today if they went back to the old portion sizes.

It should come as no surprise that money works the same way. I’ve seen this firsthand. I worked my way through college. At one point I was simultaneously working at a jewelry store, running a martial arts school, grading papers in the math department, and tutoring math for the Navy ROTC on campus. I was also taking a full course load because dropping to part time would have cost me the scholarships, grants, and loans that were supplementing this rock star lifestyle. I’ve often thought back and realized that had I known then what I would be making now, I would have thought I was crazy rich.

And yet…that is clearly not the case.

Much like the bigger plates, my transportation has gone from the bicycle my parents bought me for high school graduation to a Grand Cherokee; instead of paying rent for a quarter of an apartment, I have a mortgage; instead of working even more hours during “vacation”, I actually take vacation. My lifestyle isn’t extravagant but it expanded nicely to take up the additional money as I saw more of it roll in over time.

Some of this isn’t entirely my doing. I went to college in the dark ages before the internet so I typed up papers on a fancy typewriter that was super cool because it had a line you could correct before it printed on the page. Wildly different from the computer system I have now that causes a neighborhood brown out when I boot up. I also didn’t have cable TV and would have thought paying for radio was crazy.

I also didn’t have health insurance which was a big gamble considering that I biked everywhere and was actively competing in open karate tournaments. As a cancer survivor I do NOT recommend skipping health insurance.

How does this relate to your business?

Well think about it this way, when times are good and money is coming in it’s so much easier to throw money at your problems. When there is a downturn and there will always be a downturn, you have to stop making it rain and look at what you’re doing with your money. That’s when really tough decisions have to be made. I really do NOT want to swap out the Jeep for the old bike that I actually do still have. I mean it had vented seats VENTED SEATS and scans my brain waves to determine what I want to listen to when I drive. It even put a little “time to beat” on the screen when I use the GPS, pretty sure that’s what it means anyway.

So how do you avoid having to scale back your business spending? Simple, you determine how much you **should** be spending on your business and put the rest in separate accounts.

I can do this calculation for you, it’s actually a free service I offer to potential clients. With just the money for your operating costs sitting in your checking account, you can look at it any time you want to and spend every cent on it on your business without having to worry about how you’re going to pay your taxes, make payroll, or last out a few months of an economic downturn. 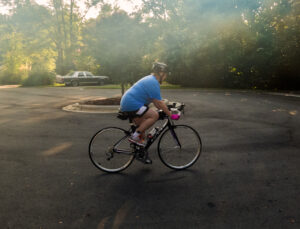